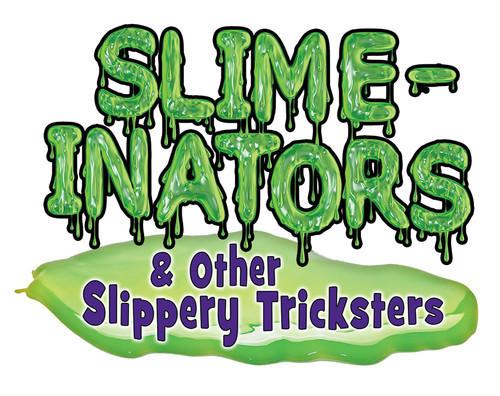 It’s slippery, it’s sticky, and it can even be stinky. Get ready to get slimed! In this series, children will love learning all about icky, gooey slime. From the deadly toxic slime produced by poison dart frogs to the bubble of mucus burped up by parrotfish to use as a sleeping bag, readers will gobble up this fascinating goo.

Each book in this series is expertly crafted to meet early elementary and science curriculum standards, as well as introduce children to bizarre and interesting facts. Innovative, grade-appropriate activities and experiments, critical-thinking questions, and fascinating fact boxes will hold readers’ interests with a viselike grip. These features will also introduce children to two fundamental components of scientific inquiry: making observations and drawing inferences. And, best of all, the activities are gooey and fun!

A new, icky animal series from Bearport! This one is Slime-inators & Other Slippery Tricksters and I received a copy of the opossum title for review. So, I know some people think opossums are cute. I am not one of them. I think they are gross and creepy, like giant rats. And I have never observed the whole “playing dead” thing, only them hissing at me and looking creepy. So I have no problem with this book emphasizing the “beneficial animal but omg so gross and creepy” theme.

In this book you will learn about opossums playing dead (and the stinky green slime and poop they release while doing so), their diets (extremely gross, especially the picture of them eating the innards of a dead squirrel), their homes, reproduction cycle (marsupial!) and other facts.

At the end of the book, there’s a recipe for making your own slime using marshmallows, corn starch, and food coloring, a picture glossary of “science words”, brief index, three suggested titles, and a few sentences about the author. I was surprised there was no photo of the actual stinky green slime (especially considering the roadkill and carrion squirrel being ripped apart pictures), but maybe it’s hard to get a photo of an opossum’s butt…

Other titles in the series cover slime molds, hagfish, parrotfish, slugs, and animals with poisonous slime like poison dart frogs.

Verdict: A delightfully stinky and gross new series, sure to please fans of the publisher’s previous poop science set and those who love all things gross and gag-worthy.

Slime and animal fans will not only get their thrills when reading this but learn several things along the way. The title of the book already says it: ‘Poisons dart frogs, sea cucumbers, and more’. So much more. The pages are packed with colored creatures from around the world, including everything from land to sea. Some are probably not surprising, while others are less known and might even surprise the reader. Each two-page spread displays a bright, real life photograph of the creature in its natural habitat, along with a smaller photo(s) of closer details, possible attackers or other possible varieties of the creature. While this is a book of facts, it’s created with idea of keeping things fun. Each creature is introduced with an exciting title such as ‘Killer Slime!’ and the page with the animal’s information appears to be dripping with goopy slime. The information is clear, but held at the right level for the intended audience. It’s explained how slime is used by the creature, what type and its purpose. Extra bits of information along are sprinkled across the pages in word bubbles with arrows to make it clear what is going on. It gives the book a lively flair. At the end of the book, is the recipe for a slime readers can make themselves. Then, there’s an index, references where readers can find more information, and a link to a website which offers more fun in correlation with the book and topic. It’s informative, interesting and fun.

Starred Review: The bright yellow, alien-looking globs on the cover of this volume in the Slime-inator & Other Slippery Tricksters series (6 titles) hint at something gross within, and, well, that’s not far off the mark. But slime molds are also seriously cool, and readers lured in by the weird goop on the cover will come away with some amazing facts; for instance, slime molds can find the most efficient route through a maze, despite having no brain! Beginning with a basic description of this single-celled organism, the chapters move on to explain how slime molds grow, eat, and move, all accompanied by bold, full-color, close-up photos—each one labeled— showcasing their brilliant colors and drippy shapes. Lawrence clearly explains the concepts, adding helpful pronunciation guides following each new vocab term, and keeps the tone engagingly enthusiastic. Eye-catching photos, surprising science, and truly fascinating topic set this apart from the crowd.