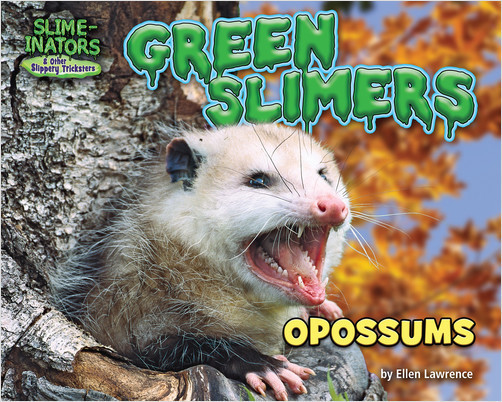 What slimy, trick does an opossum play on its hungry enemies? Why does it produce a putrid green ooze from its backside? And what might you see riding on the back of this slime- producing trickster? Learn the answers to these questions and more--and prepare to get slimed! This title will introduce readers to the slippery, slimy world of opossums! The book is expertly crafted to meet early elementary and science curriculum standards, as well as introduce children to bizarre and interesting facts. Innovative, grade-appropriate activities and experiments, critical-thinking questions, and fascinating fact boxes will hold readers' interests with a viselike grip. And, best of all, the activities are gooey and fun!

A new, icky animal series from Bearport! This one is Slime-inators & Other Slippery Tricksters and I received a copy of the opossum title for review. So, I know some people think opossums are cute. I am not one of them. I think they are gross and creepy, like giant rats. And I have never observed the whole “playing dead” thing, only them hissing at me and looking creepy. So I have no problem with this book emphasizing the “beneficial animal but omg so gross and creepy” theme.

In this book you will learn about opossums playing dead (and the stinky green slime and poop they release while doing so), their diets (extremely gross, especially the picture of them eating the innards of a dead squirrel), their homes, reproduction cycle (marsupial!) and other facts.

At the end of the book, there’s a recipe for making your own slime using marshmallows, corn starch, and food coloring, a picture glossary of “science words”, brief index, three suggested titles, and a few sentences about the author. I was surprised there was no photo of the actual stinky green slime (especially considering the roadkill and carrion squirrel being ripped apart pictures), but maybe it’s hard to get a photo of an opossum’s butt…

Other titles in the series cover slime molds, hagfish, parrotfish, slugs, and animals with poisonous slime like poison dart frogs.

Verdict: A delightfully stinky and gross new series, sure to please fans of the publisher’s previous poop science set and those who love all things gross and gag-worthy.