Free shipping and processing on all orders over $100!
Welcome!
Set of 18 titles 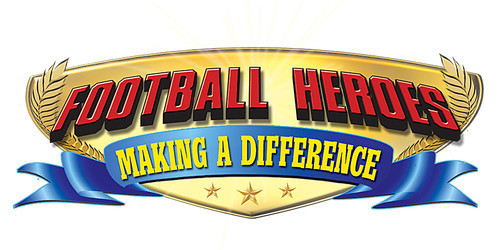 All pricing information listed above reflects this.

Discover how football’s biggest stars make an impact on and off the field in these additions to the best-selling Football Heroes Making a Differenceseries. Kids will follow their favorite players as they break NFL records and win Super Bowls while also donating time and money to help improve the lives of less-fortunate children and adults.

Stories of athletes working to aid their communities provide nice angles to help kids who are interested in sports learn about social issues and giving back, especially amid a sports climate where headlines are so often dominated by big-league selfishness. The Football Heroes Making a Difference series profiles a few such stand-up superstars. Each book opens with a rundown of the player’s athletic career, well supported by a dynamic layout and crisp photos. Adrian Peterson profiles one of the most impressive young running backs the NFL has ever seen and reminds readers that even as he’s dazzled fans and juked his way into record books, he’s never forgotten his roots in Palestine, Texas. In Larry Fitzgerald, the story is very family oriented, as he started the Carol Fitzgerald Memorial Fund to teach people about cancer and AIDS in honor of his late mother, a health worker, whose photo he carries in his wallet. Tony Gonzalez makes the case for athletics as a confidence builder, as the multi-record-setting tight end was initially intimidated on the football field but grew more self-assured when he discovered a talent for basketball. Information on his foundation’s extensive work with sick children fleshes out his altruistic side. In Tony Romo, the charitable cred may be the weakest of the bunch (not much beyond a general desire to start a foundation to help kids), but the story of how Romo persevered after not being drafted to eventually become a star should inspire. On the whole, the books are more weighted toward athletic feats than philanthropic inclinations, but that’s not necessarily a bad thing and will no doubt draw the intended audience of reluctant readers. A glossary and additional sources conclude.

Each short biography begins with the player’s career highlights and concludes by showcasing his charitable works (e.g., Urlacher’s commitment to the Special Olympics, McNabb’s work with the American Diabetes Association).

These athletes make a difference in other people’s lives through volunteering. Whether it is through an organization that contributes to various charities, such as the Matt Hasselbeck Foundation, or with a single body such as the Special Olympics, which Urlacher supports, each sports hero contributes to the community during his time off the field. Colorful photographs show not only football action shots, but also portray the player both as a youth and as an adult volunteering. Even though the information is spare, libraries needing updated football biographies for this age group will welcome this new slant. The biographies of two quarterbacks of the recent Superbowl playoffs-McNabb and Roethlisberger-will be particularly popular.