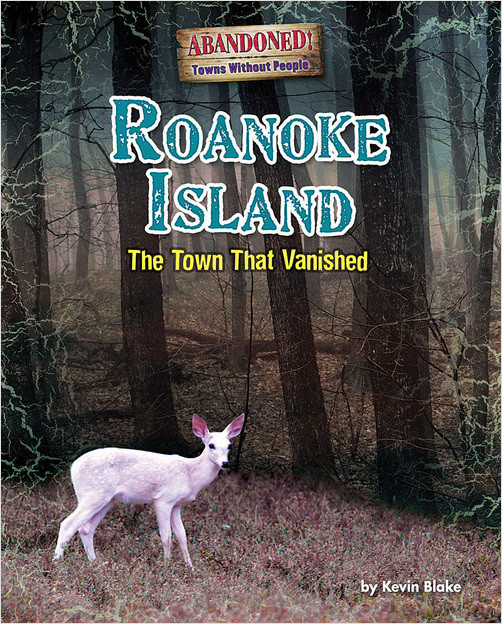 In 1587, a group of 116 men, women, and children sailed from England to North America. They landed in Roanoke, an island off the coast of present-day North Carolina. Life was hard for the settlers, who struggled to build a new life. Within a few months, the governor of the colony, John White, sailed back to England to get more supplies. Three years passed before he could return to the colony. When White finally arrived back in Roanoke, he was shocked to see that everyone had completely vanished. What had happened to the colonists? To this day, experts still aren’t sure. Roanoke Island: The Town That Vanished tells the amazing but true story of the mysterious disappearance of the Roanoke colonists. This haunting, compelling story includes an account of the contact between the colonists and local Native Americans, a description of the few clues left behind by the missing settlers, and theories about what became of them. Large color photos, maps, and fact boxes enrich the exciting story of one of the most famous mysteries in history. Written in narrative format, this book is sure to keep readers hungry for more thrilling real-life tales.

Each title begins with a brief introduction posing how once busy locations became abandoned; each book likewise ends with a comparison of then and now. Split into colorful two-page spreads, this series will appeal to readers who enjoy unsolved mysteries or learning about unusual episodes in history. Some of the stylistic illustrations, layout choices, and conclusions are intended to lend a spooky element to the series, with mixed results. Bibliography. Glossary. Index. Recommended

The Horn Book Guide Review for Abandoned! Towns Without People

Despite a rather sensationalized title, this series is genuinely fascinating. Each book traces the history of a now-deserted town, explaining its population boom, possible reasons for decline, and what each abandoned place is like today. With interesting historical and contemporary photos and well-placed
sidebars, these are solid places to begin research on some of America’s stranger places.
Reading list. Bib., glos., ind.