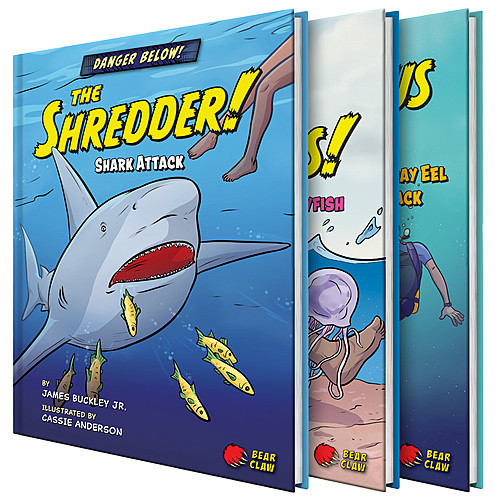 This graphic narrative nonfiction series about underwater attacks will make you think twice before getting into the water. Fascinating information and amazing graphic illustrations will keep readers engaged as they learn about the natural habitats, physical characteristics, diets, and behavior of these extremely dangerous—and sometimes deadly—creatures.

Dangerous Teeth! is a great choice for those students who love learning about nature’s most ferocious predators. The book begins with a graphic account of two divers exploring the coral reefs off of Thailand, one of whom has become too comfortable with the moray eel he’s seen in his many dives. His experience is a cautionary tale for others to remember that wild animals must always be treated as such. This narrative provides context for the informative, yet brief, overview of moray eels and other dangerous water creatures, that follows. Recommended for fans of the popular “Who Would Win” series.

Booklist Review of Danger Below!

The Danger Below! series is not for the faint of heart. Each of these high-interest volumes introduces basic facts by way of an intense fic­tion comic, divided into three brief chapters, about people being “attacked” by specific deep-sea creatures (it’s made clear that the ani­mals aren’t intentionally hurting humans). Dangerous Teeth! involves a scuba diver losing his thumb while trying to feed a moray eel. Floating Misery! sees a lifeguard getting entangled in the long, stinging tentacles of a Portuguese-man o’ war. Killer Tentacles! features beach-going chil­dren encountering box jellyfish. In Needles of Pain!, a surfer steps on a stonefish camouflaged as coral. Each comic intersperses facts naturally enough into dialogue and captions, as well as in a back-matter spread that pairs more information about the subject with full-color photog­raphy. Anderson’s illustrations are made accessible for early-level readers thanks to simple paneling, clear visual cues, and limited detail. Despite blood spurts, scarring, and other very real consequences to the underwa­ter attacks, all the victims here pull through, and Buckley includes some information on surviving, namely applying vinegar to stingers and get­ting to a hospital. Back matter rounds things out with a glossary, index, further reading, and examples of similarly dangerous fish. Brisk, visual storytelling makes these dramatic shorts suitable to a certain kind of high/low reader interested in specific marine life.