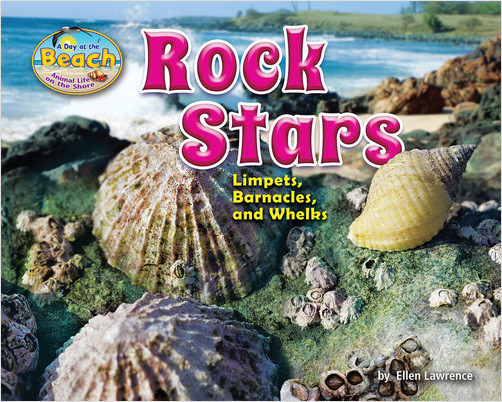 At the beach, there are tide pools surrounded by rocks. The rocks are covered with millions of tiny shells. Inside the shells are small animals--the rock stars! When the tide comes in, the rocks and shells disappear beneath the water. Then it's time for the tide pool rock stars to come to life. Filled with information perfectly suited to the abilities and interests of its primary-grade audience, this colorful, fact-filled book gives readers a chance not only to learn all about tide pool animals and their seashore habitat, but also develop their powers of observation and critical thinking. Children will investigate, for example, how a limpet stays firmly stuck to a rock, and why tiny barnacles have trap doors in their shells. Get ready for a fun and interesting day at the beach!

This is a great read for all of those, who are curious about the little creatures clinging to rocks by the sea, or fans of sea life and little biologists.

With bright and real life photographs, this dives into the world of limpets, barnacles and whelks. These small, subtle creatures might seem mundane, but there’s more to them than what is seen at first glance. The book begins with limpets, moving on to barnacles, and then to whelks. After a short, easy-to-understand description of what the small creature is and where it is found, more detailed bits of information are revealed about feeding habits, reasons for living where it does as well as any other interesting details. Never does the information bog down, but keeps the facts short and, many times, fun.

The photographs are taken in real-life settings, allowing the reader to see the creatures and their habitats as they are to be found in nature. They are bright, detailed and often include interesting scenes, which show the little guys in action. Little boxes with terms point to the features, making the meaning clear. There’s a pretty sea-shell box on each two-page spread which offers a curious detail or added information, which is sure to interest the reader. To add to the fun, every now and then, a question appears, which makes readers think. The answers to these are found at the end of the book.

The text is written in large print, making it easy to read. The vocabulary fits ages four to eight nicely, while introducing a few new terms (which can be found in a glossary in the back of the book). It’s well organized while keeping enough variety to hold interest the whole way through. Although this doesn’t dive into extremely exact attributes of the creatures, it gives a very nice overview as well as a few lesser known facts. There’s definitely something new for small ocean biology fans to discover and learn.