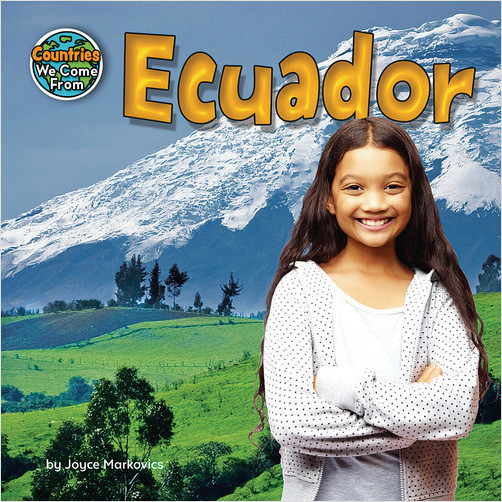 Beautiful. Wild. Full of wonder. Welcome to Ecuador! In this bright, exciting book, young readers will travel to this amazing country without ever leaving their homes or classrooms. During their journey, they will learn all about Ecuador’s cities, food, holidays, music, and wildlife. They’ll even learn how to speak a few words in Spanish!

With bright photos and welcoming descriptors, like “Full of Wonder” and “Breathtaking,” the books in the Countries We Come From series present young readers with attractive overviews of individual countries around the world. Each begins with a world map showing the country’s location and two to three sentences stating its population and the region of which the country is a part (e.g., Central America). Vibrant photos fill the ensuing pages, mixing full- and double-page spreads with circular pictures that spotlight specific elements of the land or culture. Readers will learn about the country’s geography and wildlife; crops and/or industry; Native peoples, conquerors, and independence; and aspects of culture, such as language, festivals, cuisine, and popular pastimes. Ecuador shows off the blue-footed booby, unique to its Galapagos Islands, and reveals that despite being a small country, it produces most of the world’s bananas. In Honduras, readers discover that the Maya originally lived here and that its modern residents love playing soccer. Although the other three titles reviewed here gloss over the unpleasantness of conquest, Jamaica briefly describes its history of slavery. Deserts, mountains, and the rain forest kick off Peru, but readers may be most taken with Lima’s cat park. “Fast Facts,” a picture glossary, and an index round out these concise and reader-friendly introductions to some of the world’s countries.