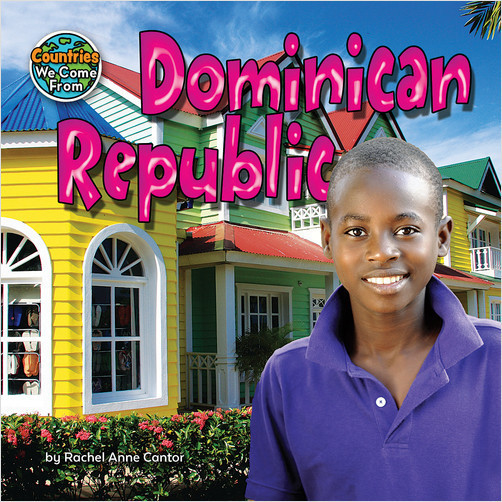 Sunny. Friendly. Beautiful. Welcome to the Dominican Republic! In this bright, exciting book, young readers will travel to this amazing country without ever leaving their homes or classrooms. During their journey, they will learn all about the Dominican Republic's cities, food, holidays, history, and wildlife. They'll even learn how to speak a few words in Spanish! This 32-page book features controlled text with age-appropriate vocabulary and simple sentence construction. The engaging text, bold design, and stunning photos are sure to capture children's interest.

The latest titles in this continuing series visit countries of the Caribbean Basin. The strongest element of the set is the appealing format; large, colorful captioned photos arranged in clean layouts with two to three sentences of simple text. Books begin with a locator map and population statistics and continue on to cover landforms, animals, cities, agriculture, history, food, and celebrations. Extras include two simple words in the nation’s language and a “Fun Facts” summary page. Coverage is positive, with an emphasis on the people, customs, and natural world rather than governments and institutions. In Cuba, the only mention of its communist government is a paragraph about the lifting of the travel ban due to the country’s recent rapprochement with the United States. This set continues the series’ focus on introducing countries with large immigrant populations in the United States. VERDICT Recommended additions.