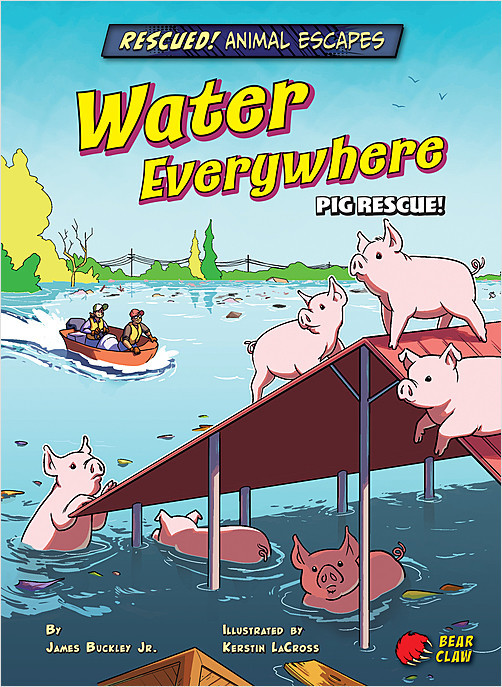 Four days of heavy rain sent water rushing toward Jeff Johnson's Iowa pig farm, threatening to flood everything in its path. The high waters could easily sweep away the animals, but Jeff had no way to move all of his pigs out of harm's way. How would the pigs survive? Find out about the smart animals who found their way to safety and the farmers who helped to rescue them in this graphic adventure of animal escape. Then, learn about other animals made it away from rising flood waters.

Combining high-interest topics–natural disasters, animals, survival, rescue–in an equally high-interest graphic-novel format, the Rescued! Animals Escapes series is a guaranteed hit. Each volume briefly explains the science behind a type of natural disaster before identifying a recent, real-life natural disaster and its threat to wildlife, farm animals, aquarium animals, and/or pets. Successive, short and easy-to-read chapters describe the rescue and aftercare of specific animals or types of animals, with dramatic and action-packed artwork adding intensity to the heroics. Deepwater Disaster centers on the Deepwater Horizon explosion that caused an oil spill in the Gulf that endangered numerous species of marine life, as well as brown pelicans, which are valiantly rescued and scrubbed clean here. Vanished in the Hurricane relates how Hurricane Katrina destroyed the dolphin tanks at an oceanarium in Gulfport, Mississippi, resulting in dolphins getting stranded in the Gulf, and their rescue by oceanarium workers. Water Everywhere highlights the extreme measures one Iowa farmer took to save his pigs before and after a flood. Wildfire Escape recounts the start of the Cedar Fire in San Diego and one woman’s evacuation of her numerous pets before the wildfire reached her home. The books conclude with descriptions of two similar animal rescues, a glossary, and related resources. With reluctant readers in mind, this series is educational and engaging.