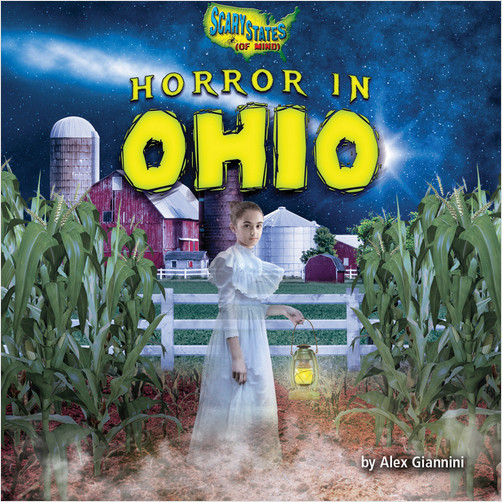 Ohio is home to the Rock & Roll Hall of Fame. However, it's also a hotspot for spirits! Strange figures appear in old houses. Ghostly pets follow visitors in the dark. Mind the sound of footsteps behind you. It might be the dead, back from the grave! Get ready to read four terrifying tales about Ohio's spookiest spots! This 24-page book features controlled, narrative nonfiction text with age-appropriate vocabulary and simple sentence construction. The colorful design and spooky art will engage and terrify emergent readers.

Booklist Review of Horror in Ohio

Four haunted places in Ohio take center stage in this entry in the Scary States (of Mind) series (10 titles). Four-page chapters delve into the history of each, sensationalizing only slightly for added effect. First up is Franklin Castle in Cleveland, said to be haunted by the mother and children who died there. A ghostly cat haunts the lighthouse at Fairport Harbor, while the spirit of Ceely Rose, who murdered her family, stalks the Rose House in Lucas, OH. And in Chillicothe, a theater that was used as a morgue during the flu outbreak, still sees some ghostly performances. Doctored photo illustrations are more campy than creepy, but textual asides and a thorough glossary makes this a well-crafted resource. An ending map of the locations mentioned rounds out this off-the-beaten-path exploration of American geography. — Maggie Reagan