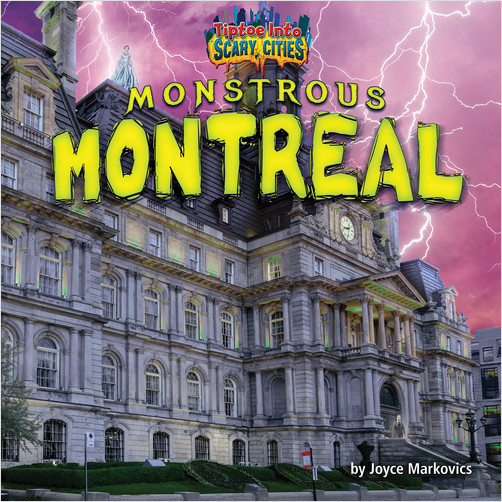 As the sun sets over Montreal, Canada, the city awakens. A low moan echoes between buildings. Something moves in a moonlit alley. It scrambles up a brick wall. What's lurking in the darkness? Get ready to read four spine-tingling stories about Montreal's spookiest spots. This 24-page book features controlled, narrative nonfiction text with age-appropriate vocabulary and simple sentence construction. The colorful design and spooky art will engage and terrify emergent readers.

Scorned women, phantom children, and mysterious painted specters are just some of the haunting figures that fill the pages of the high-interest Tiptoe into Scary Cities series (8 titles). Part fright fest, part city guide, this series offers easy vocab, simple sentences, and creepy (but not too scary) anecdotes as it takes readers on a guided city tour, introducing them to famous landmarks that are said to be haunted. Creepy Chicago offers a dose of history, telling of the families who died on the Chicago River during the 1915 Eastland disaster and the alleged “devil baby” left at the Jane Addams Hull House in 1912. England’s bloody history has created its share of ghosts, and Lurid London opens with the famed Tower of London and two beheaded princes who are said to haunt it. Canada has its share of oddities, and Monstrous Montreal takes readers on a tour of a funeral home turned nightclub and a cemetery transformed into a city park. The famous flock to New York City, even, it seems, when they’re dead, and Nightmarish New York includes ghostly appearances from the likes of Edgar Allan Poe and John Lennon. The tone and photo illustrations, complete with superimposed ghosts, are overdramatic, but the brief tales are interesting, and for emerging readers, this is a spooking, unique way to explore new cities.