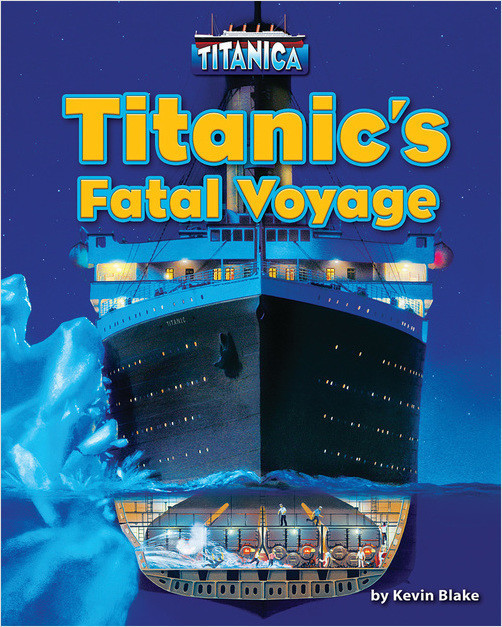 “Iceberg right ahead!” yelled Frederick Fleet, a crewmember aboard the Titanic. The ship had only seconds to spare. Titanic’s officers steered the ship to the left as quickly as they could to avoid a head-on collision. But they weren’t fast enough. The right side of the ship struck the side of the ice mountain floating in the north Atlantic. The fate of the Titanic—and its 1,317 passengers and 885 crew members—had been sealed.

Titanic’s Fatal Voyage tells the devastating story of how the gigantic and supposedly unsinkable ship was swallowed by the sea on its maiden voyage. Readers will learn about the ocean liner’s journey in vivid detail, as well as incredible tales of courage and survival. The fascinating content and large-format color images, maps, and fact boxes bring the Titanic’s tragic story to life.

Although short, these pages hold a small wealth of information surrounding the history—from construction to passengers to the tragedy—of the titanic.

The first pages grab attention by giving a short glimpse of the Titanic the moment the iceberg was first spotted. After this raised tension, it slides back to explain the dreams behind the development and design of the huge, luxury ship. In two-page spread sections, various moments and facts leading up to the accident are presented. This lay-out keeps the information exciting and concise enough to hold the interest of even more reluctant readers.

Each section of the historical glimpses starts off with a short description, which gives the names of the people involved, various facts surrounding the ship and short explanations. The print is fairly large, making it easy to read. More difficult terms are placed in bold and can be found again in the glossary at the end of the book. While these paragraphs do hold the brunt of the historical facts, it’s the added remarks thrown in among the pictures and illustrations which make this book fun.

The text is supported by bright and very clear photographs, which not only bring the historical side alive, but also add assistance on understanding more technical aspects of the history and ship. There are dabs of extra and fun facts scattered among the pages, which deepen the knowledge but also, are simply fun to read.

This books does stick to hard facts. Although it can be read in one sitting, it’s the kind of book to go back to and check certain pieces of information later again. Some of the information is well-known, while other things will probably be a surprise. The addition of real photographs, especially of the passengers, adds a nice touch.

Young Titanic fans will reach for these six volumes that cover almost every facet of the ship and its sinking. In Last Hours, for example, several diagrams and cutaways illuminate the various inner workings and levels of the boat and how exactly the iceberg damaged the vessel. Kids will learn of the ship’s construction, the passengers (many of whom were rich and famous), the fatal collision, and even related ghosts and mysterious hauntings. In all of the books, the language is clear, and there are ample brightly colored drawings and photographs to complement the text. VERDICT: A well-crafted presentation of a timeless topic. Expect a high demand from Titanic aficionados.