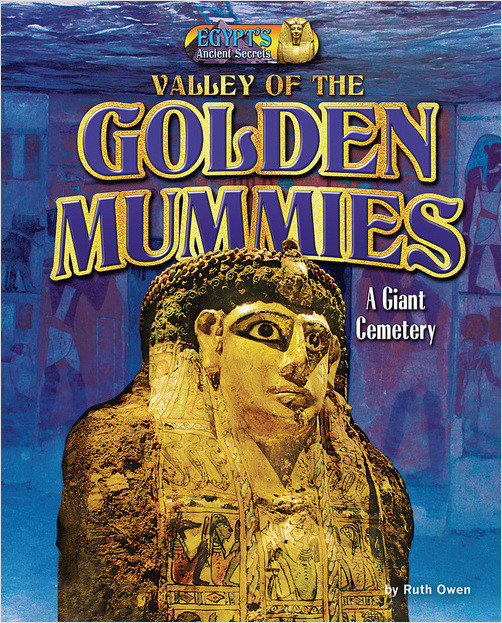 Valley of the Golden Mummies

In 1996, archaeologists made an incredible discovery--a huge, ancient burial place in the Western Desert of Egypt. As the team worked at the site, they discovered mummies encased in gold, jewels, coins, and jars that once held wine. What have archaeologists learned about life in ancient Egypt by studying the mummies? What secrets have the artifacts buried in the tombs revealed? And could it be possible that more than 10,000 ancient Egyptian mummies are buried in the valley?

In this series readers can learn about the interesting mysteries surrounding the ancient Egyptian civilization. The titles cover lots of in-depth information about the pyramids, mummies, religious rituals, and burial practices of the ancient Egyptians, which are fascinating to students because they are so different from our customs today. These books are very readable high-interest books and convey their facts in a narrative nonfiction format. High quality color images and pictures on each page grab the reader and let them see the history being described. At the end of each book, the author poses questions or mysteries that are still unsolved, because for all of these topics many questions still remain to be researched. Overall, this series presents these selected elements of ancient Egypt in a way sure to fascinate any student interested in the topic.
Recommended

Booklist Review for Valley of the Golden Mummies: A Giant Cemetery

This volume in the Egypt’s Ancient Secrets series follows renowned Egyptologist Zahi Hawaas on an exciting 1996 dig near the Bahariya Oasis in Egypt’s Western Desert. After hearing about a donkey that stumbled in a hole containing a golden burial mask, Hawaas rushed to the scene and discovered an ancient cemetery that could contain as many as 10,000 mummies! Readers will get a basic overview of the excavation process, as well as an understanding of how a person’s class affected their burial—for instance, only the wealthy could afford gold masks. The text also follows one mummy to the lab for examination and investigates a potential mummy’s curse. Liberally illustrated with labeled photos of artifacts and the dig, this look at one of Egypt’s less-discussed discoveries will pique the interest of any Egyptophile.

The “secrets” of ancient Egypt are revealed through visits to archaeological excavations and analysis of what they reveal about Egyptian civilization. Spreads have several paragraphs of text, with sufficient background and detail. . . .Illustrations are an eye-catching mix of well-captioned drawings of processes like mummification and pyramid construction alongside contemporary photos of artifacts and locations. The market has a surfeit of sets on ancient Egypt, but this one offers valuable perspective on how ongoing archaeology and scholarship continue to expand current knowledge. VERDICT: Ghost Ship, Tomb Robbers, and Golden Mummies will be new for most readers and are primary purchases. Great Pyramid, King Tut, and Sphinx are good additional purchases.