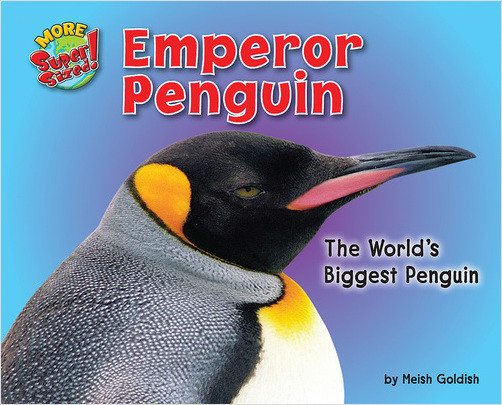 How large is the world’s biggest penguin? An adult emperor penguin can grow up to about 40 inches (102 cm) tall, which makes it about as tall as a six-year-old child! Emperor penguins live in the coldest place on earth—Antarctica. To survive the extreme conditions, emperor penguins have a layer of feathers that are waterproof and windproof. They also have a thick layer of fat to help them stay warm. With all these layers, an adult male emperor penguin can weigh as much as 84 pounds (38 kg). That’s one big bird! In Emperor Penguin: The World’s Biggest Penguin, large color photos and grade-appropriate text will engage young readers as they learn about the natural habitat, physical characteristics, diet, life cycle, and behavior of this super-sized bird. A comparison diagram is also included to show readers the animal in relation to a familiar object.