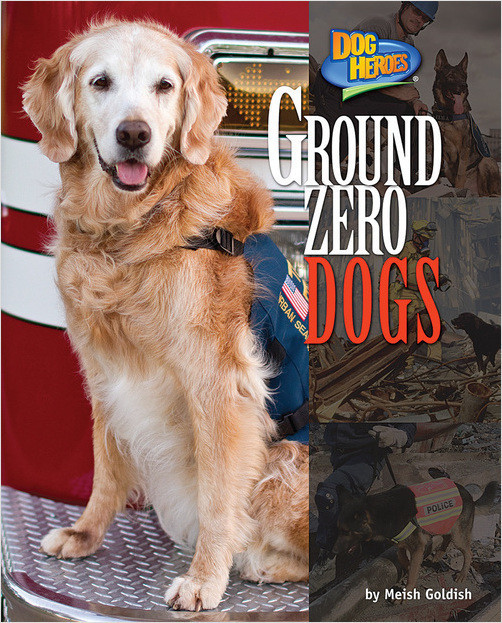 Omar Rivera, an office worker who is blind, and his guide dog, Salty, were on the 71st story of the World Trade Center’s North Tower on the morning of September 11, 2001 when terrorists hijacked two planes and crashed them into the World Trade Center towers. Omar’s coworkers raced to the stairway to escape the burning building. With chaos all around, Omar told his dog to guide him down the stairs. Would Salty be able to lead his owner to safety?

In this book, young readers will meet the brave dogs that helped people during and after the deadly terrorist attack. From guide dogs that calmly led their owners to safety, to the 300 search-and-rescue dogs that used their powerful sense of smell to try to find survivors in the rubble, these incredible animals were part of the largest canine rescue operation in U.S. history. With true stories and full-color photographs of dogs working at Ground Zero, this book is sure to appeal to dog-lovers everywhere.

Students can use this book in the Dog Heroes series to debate whether or not animals should be used in dangerous situations to help people. They can cite the facts that the author offers and make additional inferences, again using the information from the book.

Students can use this book in the Dog Heroes series to debate whether or not animals should be used in dangerous situations to help people. They can cite the facts that the author offers and make additional inferences, again using the information from the book.

[Starred review]. The Dog Heroes series is up to a surprising two dozen titles now. The bigger surprise? They keep getting better. Ground Zero Dogs is the best entry yet, introducing readers to a select few of the roughly 300 search-and-rescue dogs that used their agile feet and powerful senses of smell (dogs can detect a human up to 30 feet beneath the earth) to locate both survivors and bodies among the World Trade Center rubble. Pictures from 9/11 and the aftermath are fairly intense, but the stories are no less than inspiring. Salty helped his blind owner escape alive from the seventy-first floor, and Trakr uncovered a woman who had been buried for 24 hours. The human support is just as poignant. Vets were on hand to bandage, massage, and treat canines, while some owners buoyed exhausted dogs on 12-hour shifts by hiding in the wreckage so the animals could “find” a live person. Photos are wonderful, text is clear, and closing fact and “Common Breeds” pages conclude.