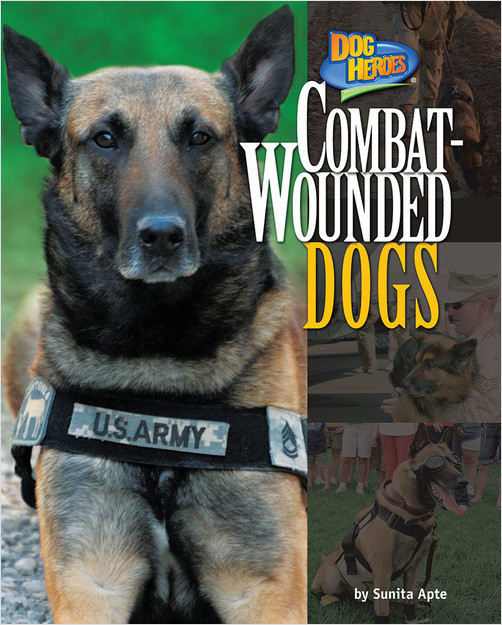 From the front lines of battle to the recovery process at home, Combat-Wounded Dogs shines a spotlight on real-life dog heroes that have been injured while serving their country during wartime. Kids will discover the role dogs play in the military and learn how they are treated when harmed in the line of duty. Readers will also learn about a new hospital that recently opened at Lackland Air Force Base in San Antonio, Texas, that treats dogs with combat wounds. The inspiring narratives in this title are sure to touch every dog lover.

These volumes showcase the work done by dogs serving in active military units (Combat) or assisting people with disorders such as epilepsy (Seizure). Double-page spreads feature facts about the characteristics dogs need to function in these specialized roles, how they are trained, and examples of their work; photographs accompany the texts. The books, though slight, are effective in their accessibility.

Military dogs that have been injured in combat are true heroes! Here readers will learn the dogs’ role and how they are treated medically after being hurt. Colorful photos and fact boxes enhance the layout. A glossary, bibliography, web sites, and index are included.

Military dogs that have been injured in combat are true heroes! Here readers will learn the dogs’ role and how they are treated medically after being hurt. Colorful photos and fact boxes enhance the layout. A glossary, bibliography, web sites, and index are included.

For anyone already in love with pooches, the titles in the Dog Heroes series will only increase the certainty that dogs are the greatest things on the planet. The series is a surprising 17 titles deep and touches on everything from sled dogs to the Dog Scouts of America. Combat-Wounded Dogs kicks off with a bombing in 2006 Iraq, where an explosion not only wounded soldier Brendan Poelaert but also Flapoor, his military working dog (MWD). Flapoor’s survival is but one tale in a long history of canine soldiering, which took off in World War II and continued through Vietnam, where it is estimated that 10,000 soldiers were saved by dogs. A red-and-black design fits the dramatic atmosphere, and challenging vocabulary words (shrapnel, aerovaced) nudge along the ultimately inspiring story of how MWDs evolved from “equipment” to “soliders.” Seizure-Alert Dogs details the otherworldly ability of dogs to sense when a human’s seizure is imminent and take protective action (such as straddling the person’s body). Many of the pages are given to training, which begins at two months and can cost $20,000 per dog. But the heartwarming story of a German shepherd named Lady and photos of these stalwart animals with their extravagant gear and cautionary patches (“Do Not Pet”) will keep the smiles coming. This is satisfying coverage of a high-interest topic.