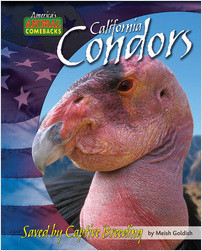 Books in the America’s Animal Comebacks series spotlight species teetering on the brink of extinction that have been brought back by determined conservationists. California Condors takes on the titular species, which has lived in North America for 40,000 years. But with the settling of the West, hunters and ranchers targeted the enormous birds, and their numbers dwindled. In 1987, when scientists captured the last California condor in the wild, a careful captive breeding and release program began increasing the species’ population from 27 to 320, with half of those living in the wild. Before European settlement, the animals featured in Red Wolves roamed eastern North America, but in the 1980s, only 17 remained. Biologists began breeding them in captivity and gradually releasing them. Today, more than 100 red wolves live in the wild and 200 more are being raised in American zoos. Despite rigid division into separate topics on the 12 double-page spreads, each volume has a well-organized text that flows logically from one idea to the next. The illustrations, mainly photos with a few helpful range maps, come from many sources. Appended features include a page of fast facts, information about a couple of related species that are endangered, a glossary, brief bibliographies, and a link with more information online via the publisher’s series Web site.