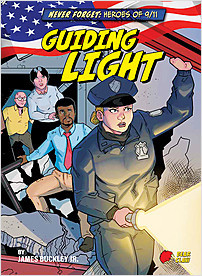 This graphic novel series includes six titles honoring heroes that saved lives during the attacks of 9/11. This volume spotlights police officer Moira Smith who used her flashlight, her wits, and her bravery to lead dozens of people out of the World Trade Center’s south tower to safety before ultimately being trapped and killed by the collapse of the building.

The author and illustrator both convey the danger and horror of that day without subjecting young readers to the carnage of the tragedy. Instead, readers see an officer who loves her family, loves her job, and calmly performs her job with great courage during a crisis.

The book includes a synopsis of the terrorist attacks, photographs of impacted sites, paragraphs on other heroes, a glossary of terms, index and suggested readings and sites.