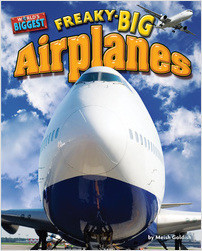 In a browsing item par excellence, Goldish introduces nine existing mega-aircraft, from the 840-passenger Airbus A380 to the 159-foot-long B-52 bomber. The simply phrased narrative and captions describe what each vehicle carries, along with top speed, full weight, and other basic facts. The text is shouldered aside, though, by big—you might even say “freaky-big”—color photos that portray each jet either in the air or on the ground alongside ant-like humans or seemingly miniature cargo. Some views of cavernous insides also provide a riveting sense of the size of these monsters. A visual glossary and a look at four other outsize flying machines (the U.S. military’s Sikorsky CH-53E Super Stallion helicopter, for instance) cap this awe-inspiring entry in the World’s Biggest series.